Outerwear with Deep Roots: A History of Jacket Evolution

When it comes to pulling your outfit together, your choice of a jacket or coat is one of the most decisive moves you can make.

When it comes to pulling your outfit together, your choice of a jacket or coat is one of the most decisive moves you can make.

Great outerwear not only keeps you warm and comfortable, it also anchors your look. It’s one of the many reasons we’re steeped in the classics and love to hit the sartorial archives for inspiration.

We’re always looking for ways to make vintage silhouettes modern and fresh. Five styles that play a big role in our current collection are the bomber, chore coat, garage jacket, coaches jacket and the overshirt. Here’s a look back at the history of each, along with a few details about our latest design updates that make them more durable, comfortable and versatile than ever.

The evolution of military uniforms is a story of the close relationship between form, function and design—and the ways that the bomber jacket has morphed over decades is a case in point. Originally worn by Army pilots in 1917, the earliest iterations were made of horse leather or seal skin, and fur-lined to protect pilots from the bitter cold in open-air cockpits.

Later versions in the WWII era included iconic styles like the B-series flight jackets that were technically the first true bombers. These were designed with heavy-duty sheepskin, a finished leather exterior and shearling lining. A signature characteristic of the silhouette was a wide collar with a double-buckle throat-latch to keep pilots flying at high-altitude as warm as possible.

As flight conditions shifted over time, with upgraded plane design and expanded technology, bomber jackets became slimmer and sleeker. One of the most iconic models was the 1949-issued MA-1, when the bomber shed its sheepskin collar in favor of knit elastic, and was fabricated in nylon instead of leather. It most closely resembles the popular styles worn today. 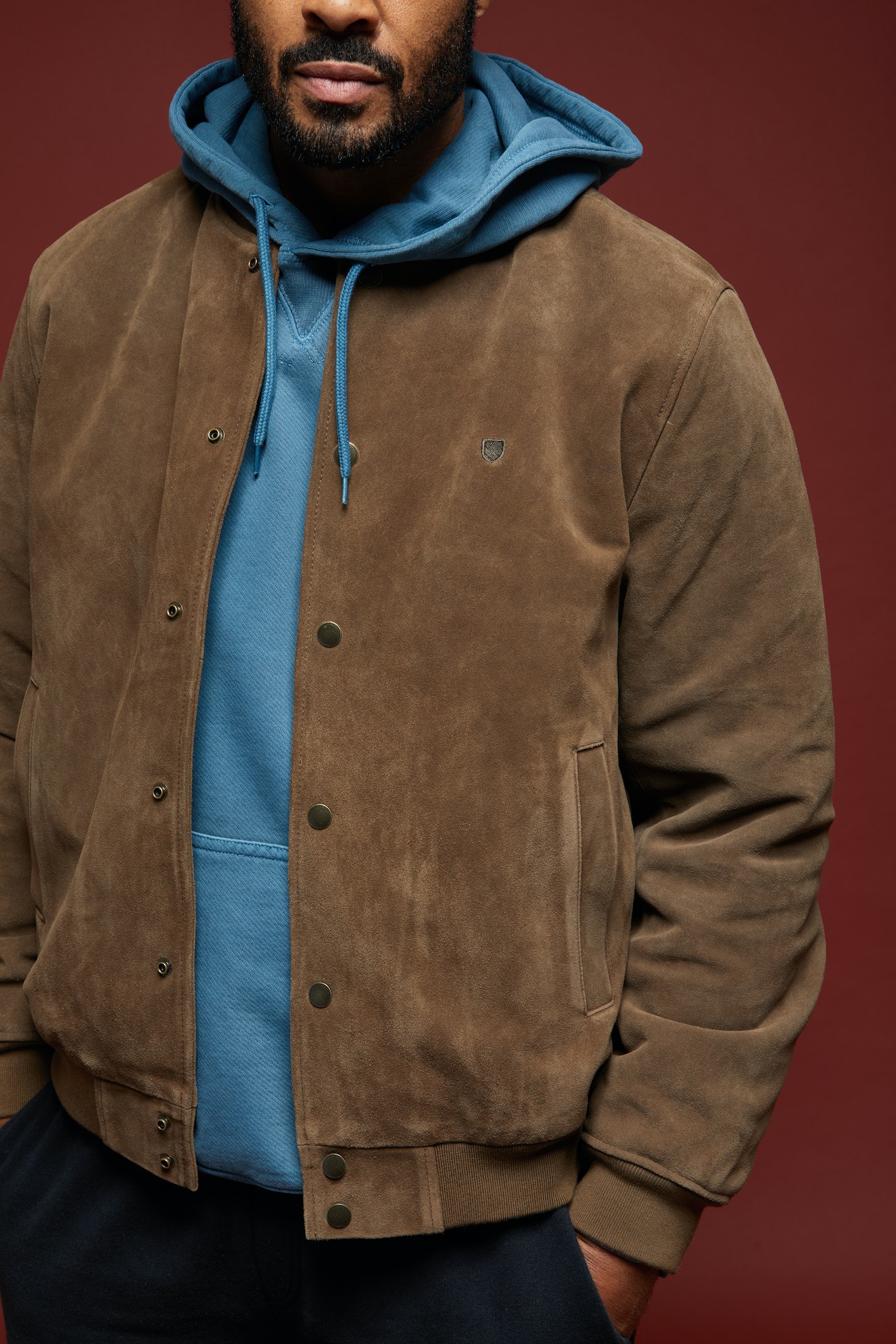 When we designed our Dilinger Bomber Jacket, we opted for modern finishes like an onion-quilted poly outer with a DWR coating for weather resistance. We also created a non-quilted version with a textured exterior in new hues like mahogany and brown houndstooth.

These updated fabrications and colors are a shout-out to the various civilian tribes of past decades—punks, skaters, hip-hoppers and other style rebels—who adopted the MA-1 as a symbol of their tough, outsider ethos.

The newest approach to wearing the bomber is less about which group you belong to and more about personal expression and appreciation for a highly versatile jacket with timeless style credentials that looks sharp with all your favorite pieces.

Another quintessential heritage silhouette is the chore coat. Born in late 19th-century France to suit the needs of laborers and farmers, its roomy shape, typically made in cotton canvas or moleskin, was perfect for layering over bulky workwear like overalls. Plus, the chore coat had plenty of pockets for stashing essential tools and personal effects.

The French called their chore coats “bleu de travail” (blue work) because they were dyed in a vibrant blue hue. As a side note, the iconic blue chore coat re-achieved cult status in 2011 with the release of a documentary featuring street-fashion photographer Bill Cunnigham, whose preferred uniform while pedaling around Manhattan on his bicycle, was a blue chore coat.

The North American version of the chore coat didn’t come on the scene until the early 1920s, with the first version crafted by Carhartt in blue denim, and soon after in duck-brown canvas with a corduroy-lined collar and various heavy-duty versions for rugged winter weather.

When we considered a new spin on the chore coat it was with equal parts reverence for the past, and tons of energy around new incarnations. We leaned into a boxy silhouette for women with fresh options in vegan leather and corduroy. We think the beige, cruelty-free leather looks especially cool paired with our coordinating Aberdeen Trouser Pant.

Our men’s Survey Utility Chore Coat is another fine example of utilitarian style made with a unique stretch twill fabric containing recycled polyester and treated with a DWR coating for extra water repellency. The corduroy on the collar and patch pockets adds the perfect pop of texture.

A coaches jacket shares a lot of attributes with a windbreaker. It’s often made of nylon with a soft lining for comfort and warmth. The signature characteristics of the style are a small collar and snap buttons that run up the front. As the name implies, the jacket came up through the ranks in the world of athletics as the go-to casual jacket option for coaches. Emblazoned with team logos and names, the coaches jacket also looks great on the screen, signaling the presence of leadership to fans watching the game.

Exactly when and where the coaches jacket transitioned from the stadium to the street is open for debate. Some claim its transcendence is largely tied to 1982 when the Oakland Raiders moved to Los Angeles and sportswear style influenced streetwear in South Central L.A. While trends don’t tend to emerge in a singular fashion, hip hop culture was seminal in making the coaches jacket a major thing—including iconic rapper, Ice Cube.

Our men’s Beta Coaches Jacket breaks away from the traditional nylon construction and elasticized cuffs to a refined waxed cotton canvas with a longer silhouette. It’s the outerwear solution when you need something that combines style with weather-resistant durability. Our Claxton Beta Zip Hood Jacket in a modern poly canvas retains the classic features of a coaches jacket with the handy addition of a hood. Both are great layering pieces that pair equally well with sporty casual styles or crisp classics like a button-down shirt.

The ascendancy of the garage jacket reached new heights during the post-WWII boom in American automobile culture. By the end of the 1950s, one in six Americans were employed in the automotive industry, the Eisenhower-era government kicked in for an expanded interstate, shifting the cultural mindset to one where a car was an important extension of self. 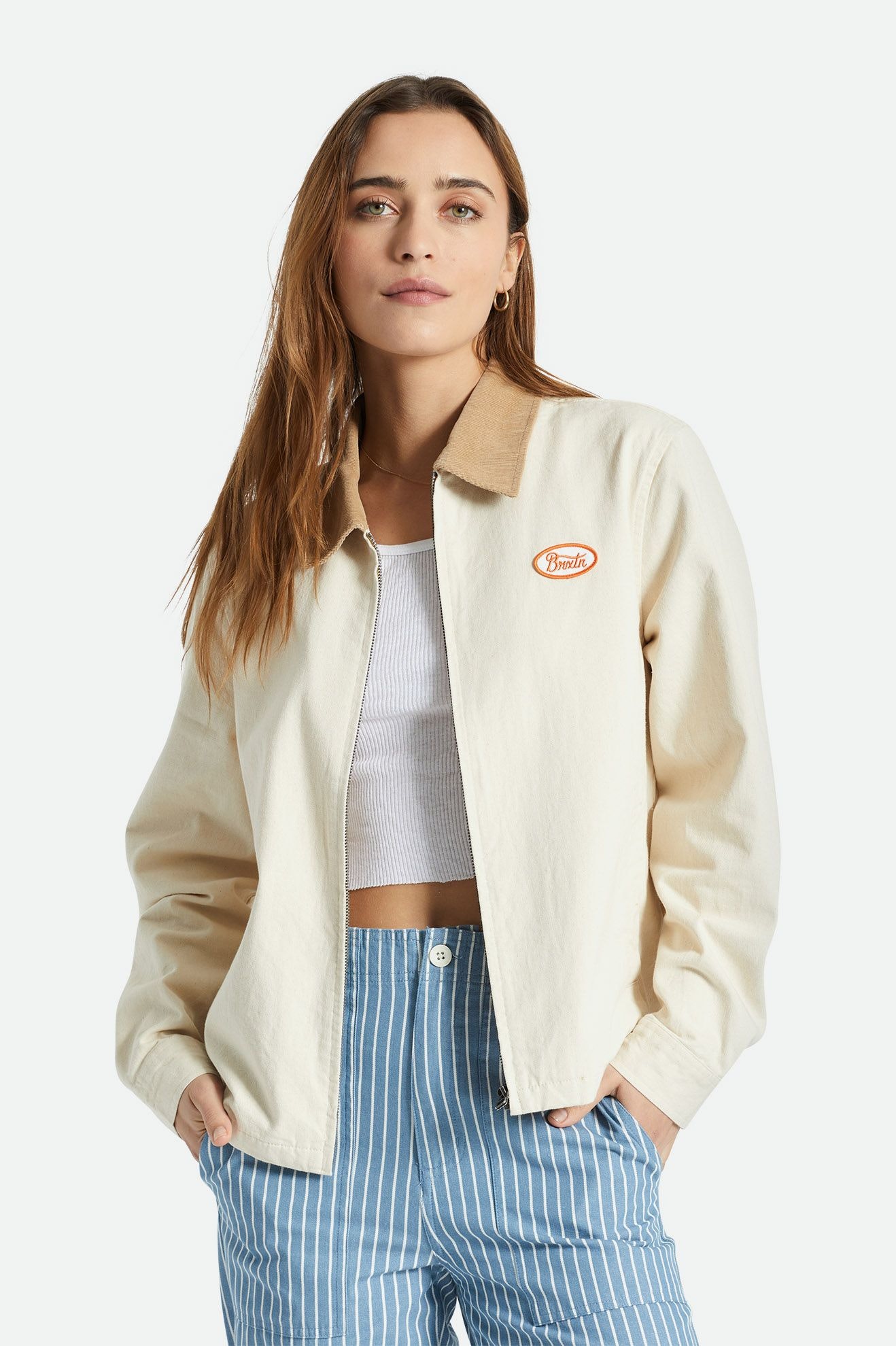 Naturally enough, an increase in cars created a need for more repair shops and more garage-jacket (and coverall-) wearing mechanics. The standard issue jacket was typically blue or gray with the mechanic’s name or a brand name embroidered above the chest pocket. Like its cousin, the chore coat, this silhouette had ample pockets.

The garage jacket is a hardworking uniform piece that has changed little over the decades—the heart and soul of its aesthetic is strongly associated with the ‘50s and the rockabilly heyday of auto-obsessed America.

Our Utopia Jacket for women and men takes the best of that era and retools the silhouette in durable wide-wale corduroy in eye-catching jewel tones. The cut and custom Brixton chest patch are a nod to the garage with modern updates that take you anywhere you want to go.

While our timeless flannel shirts, including our Heavyweight Bowery Flannel Shirt, don't technically live in the same category as coats, they so effortlessly stand-in for transitional outerwear that they deserve major consideration.

With the fascinating history of flannel spanning from 17th century Wales to the grunge heyday of the ‘90s to its current associations with a rugged outdoor lifestyle, it’s easy to understand why a hard-wearing classic flannel as an overshirt is a legitimate outwear option in its own right.

At Brixton, it’s clear we’re passionate about the history of heritage workwear and vintage-inspired outerwear silhouettes. Inspired by the backstory of these classics, it's our quest to make the bomber, chore coat, garage jacket, coaches jacket and overshirt as relevant, fresh and functional as ever.

We’re back with another Wednesdays on Wax featuring a playlist curated by our friend, Michael Schulz, Head of Signature Artist at Fender.

The Best Winter Hats for Women and Men

Top styles and inspiration to keep your head in the game.

The essence of Brixton is edge, yet pulled together and sharp with elevated staples worn with a standout piece or two.

Stay in the Know

Enjoy 15% off your first order and be the first to know about new products and happenings.